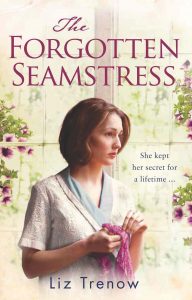 Local author Liz Trenow contacted me whilst researching her second novel. She wished to conduct some research into textile conservation and find out what it entails. I invited her to visit the studio on 17 February 2012 to show her what being a textile conservator involves and answer her questions.

Liz is Sudbury-born and is part of the Walters family, who still run the silk weaving company Stephen Walters and Sons Ltd. She had just completed her first novel The Last Telegram which draws inspiration from the Sudbury weaving history and its role in weaving silk for parachutes during the Second World War.

Her second novel, The Forgotten Seamstress is partially inspired by a silk fabric woven for the wedding of Princess Mary of Teck to George, Duke of York (later George V) which is now in the collection at the Warner Textile Archive in Braintree, Essex. The fabrics woven for Princess Mary were generally referred to as the ‘May Silks.’ In the novel Liz has a young, modern-day textile conservator unearthing via research on the old textiles a long hidden story of two young seamstresses working at Buckingham Palace in the early 20th century.

It was lovely meeting Liz and helping her with the research for her novel. I enjoyed going to the book launch of The Forgotten Seamstress on 30 January 2014 at the Warner Textile Archive.

Publication of the long awaited book on Ham House

Publication of the long awaited book on Ham House