Tapestry for the V&A – Moses and Pharaoh’s Crown

The tapestry ‘Moses and Pharaoh’s Crown’ is part of a tapestry series ‘The Story of Moses.’ This tapestry was woven at the Gobelins tapestry factory, Paris most likely as part of a set completed in 1687 and given by King Louis XV to his brother in 1716.

The tapestry is based on a painting by Nicolas Poussin ‘The Infant Moses Trampling on Pharaoh’s Crown’. The tapestry depicts the Pharaoh reclining on a couch with a crown at his feet. The child Moses is treading on the crown while people standing around the main figures look on in alarm. The tapestry was woven in wool, silk, and gold metal thread, expensive materials to suit the ostentatiousness of the Royal Court.

The tapestry belongs to the Victoria and Albert Museum in South Kensington, London and conservation treatment was required to prepare it for inclusion in the new ‘Europe 1600-1800’ galleries. The tapestry was  wet-cleaned at The Royal Manufacturers De Wit, Belgium before it arrived at our studio for stabilisation and support treatment. The main concern for the condition of the tapestry was damage to the silk areas which were faded and weak due to light damage. Some of these areas were heavily darned or rewoven. The wool warp and weft were in reasonable condition except for losses in one particular shade of brown wool, particularly along the bottom edge of the tapestry.

The main purpose of the treatment was the need to provide support and to ensure the tapestry could be hung on display for an extended period.  Furthermore it was felt that redefinition of significant details, such as faces, was desirable as these areas draw the attention of the viewers the most.

The tapestry was therefore given a full linen support on the reverse to which areas of damage were supported using conservation stitching. Laid couching stitching was carried out to support the larger weak areas, while the detail of faces, hair, and Pharaoh’s Crown were treated by warp couching which supports and fills in missing areas of the image.

The  conservation treatment  has given the tapestry much needed support and a small amount of aesthetic improvement which will ensure that it is both safe and impressive when on display. The tapestry can to be viewed at the Victoria and Albert Museum in the new Europe 1600-1815 Gallery which opened on 9 December 2015. 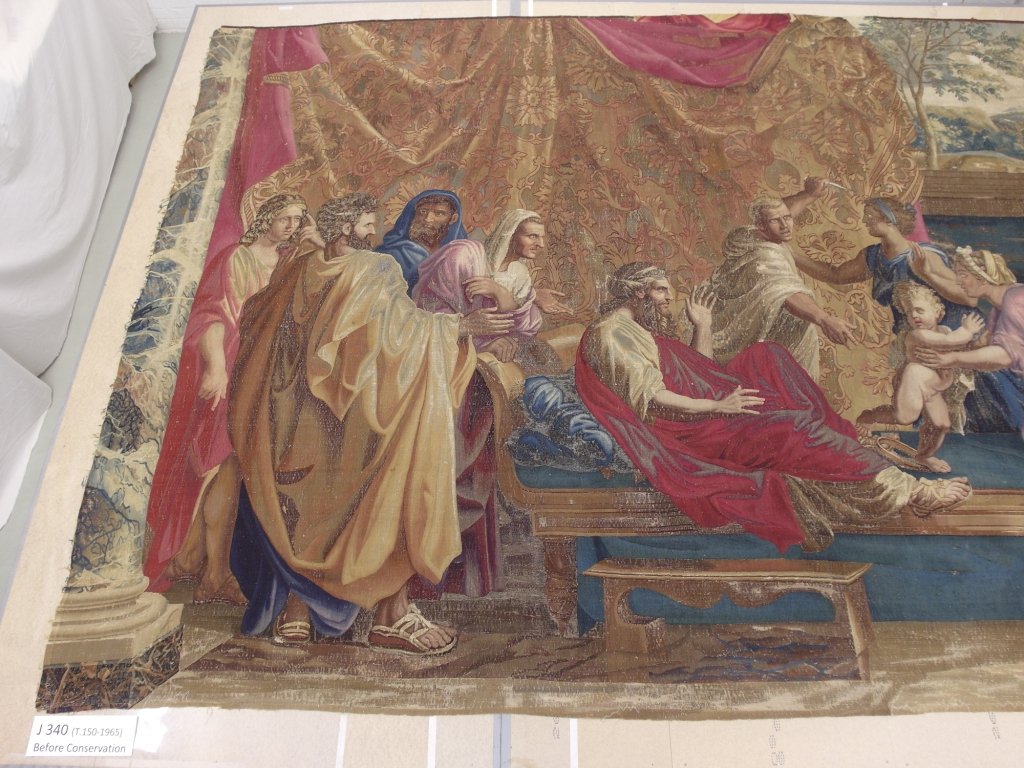 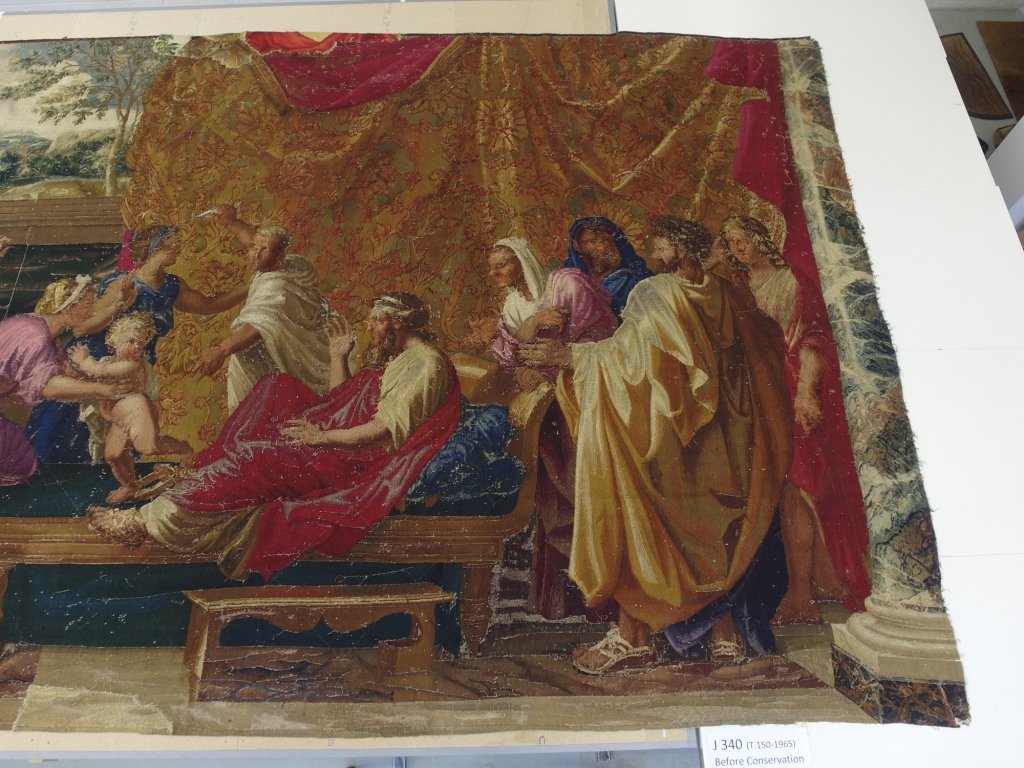 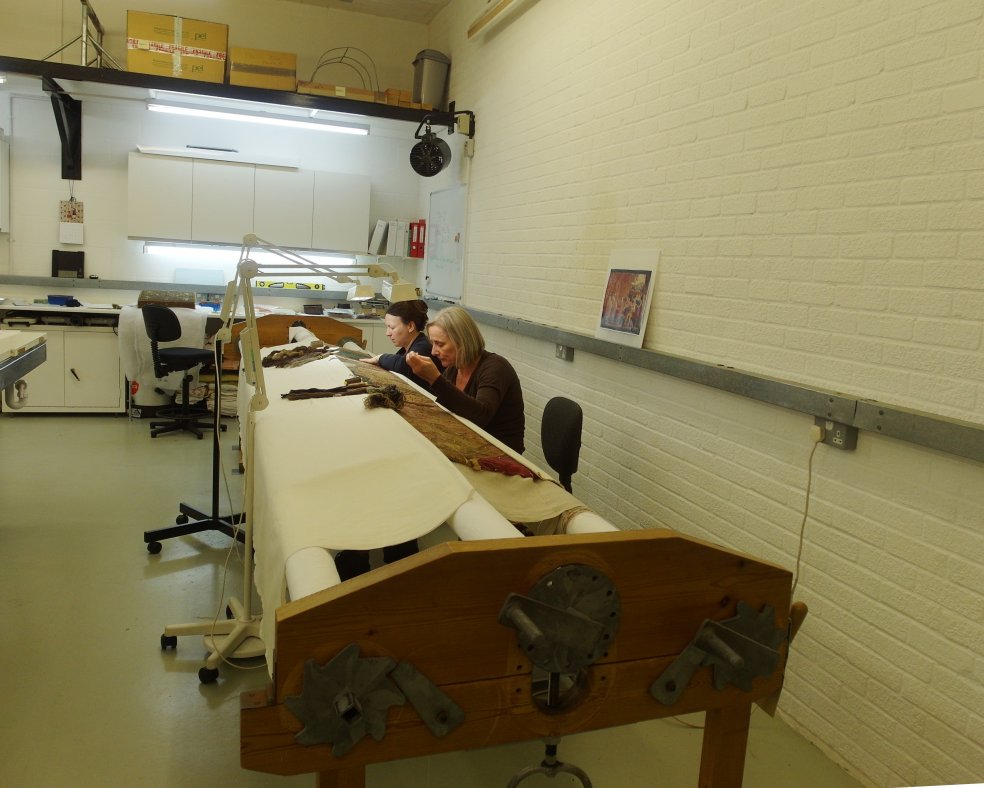 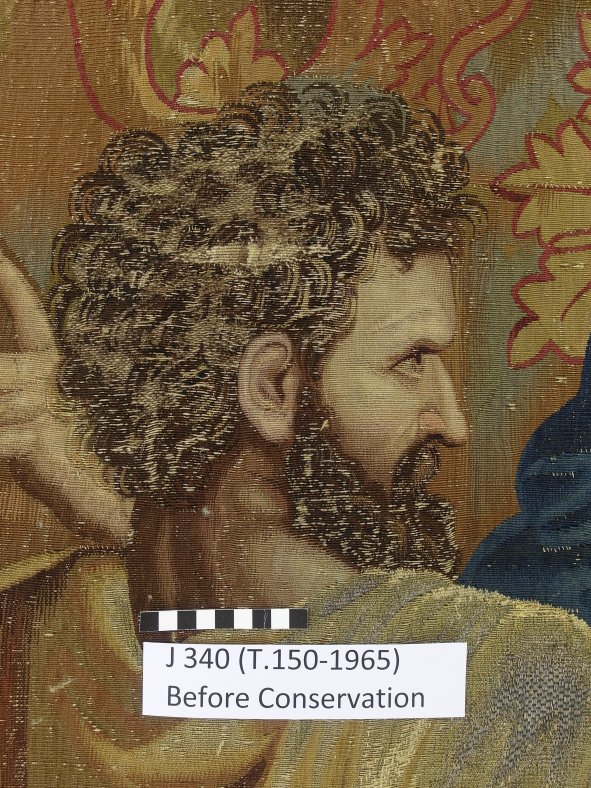 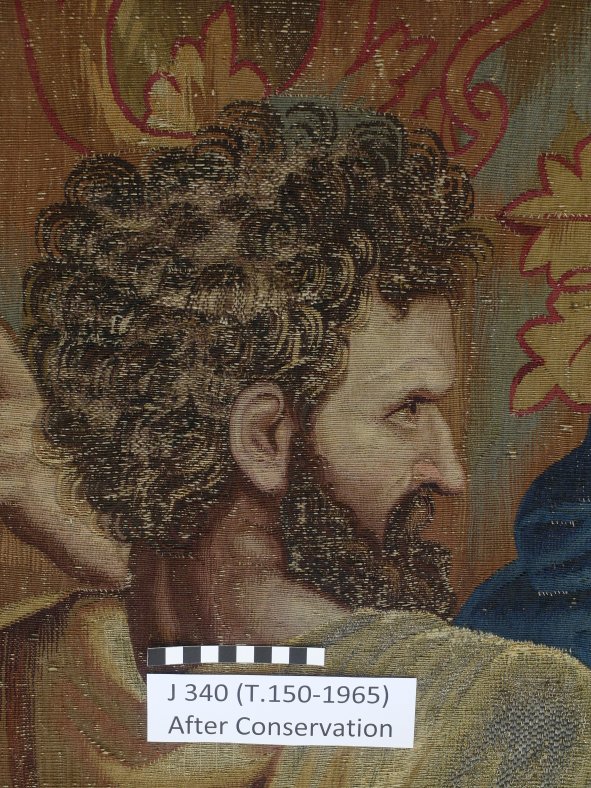 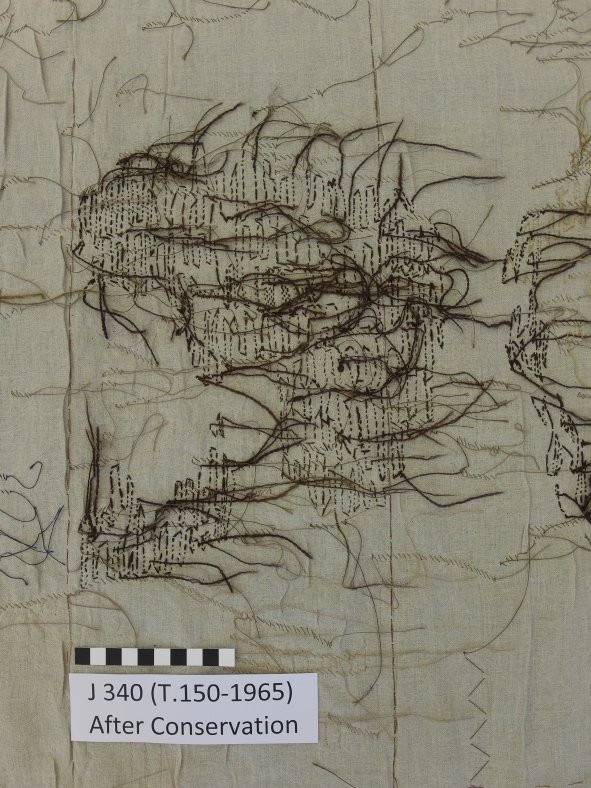 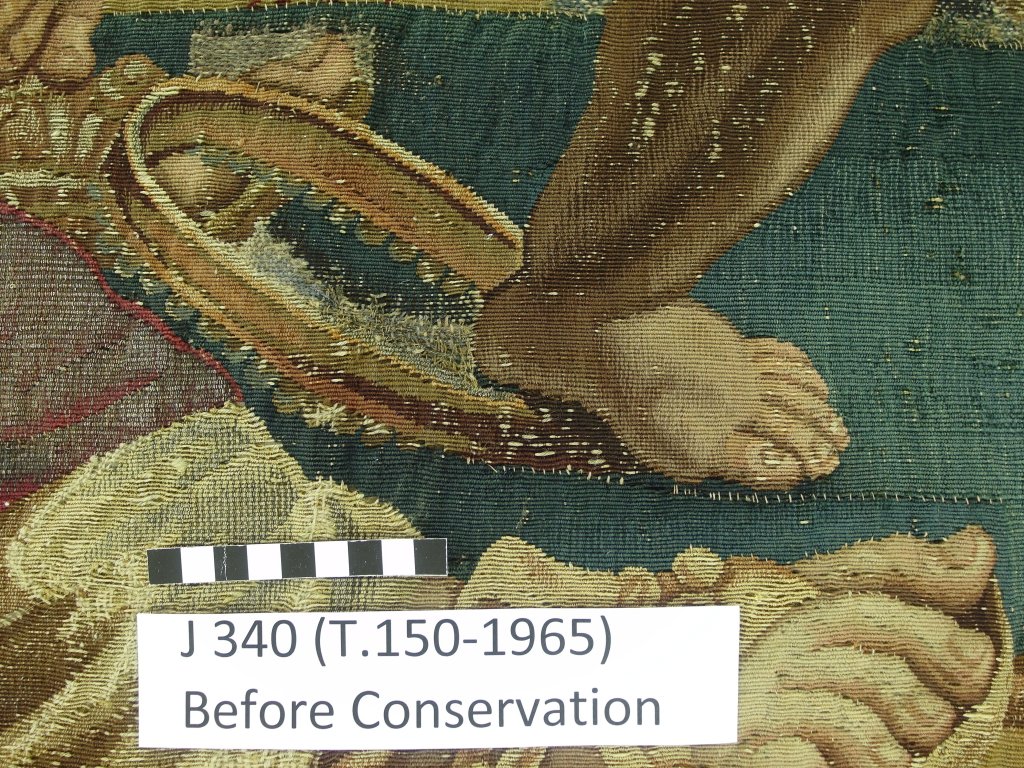 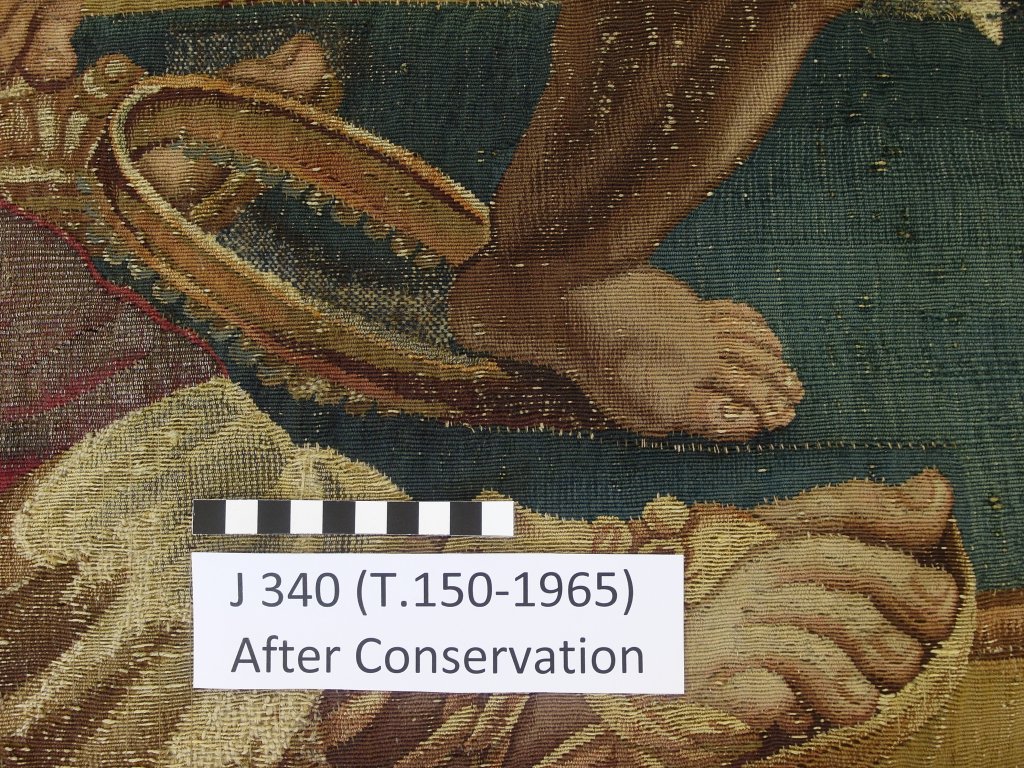 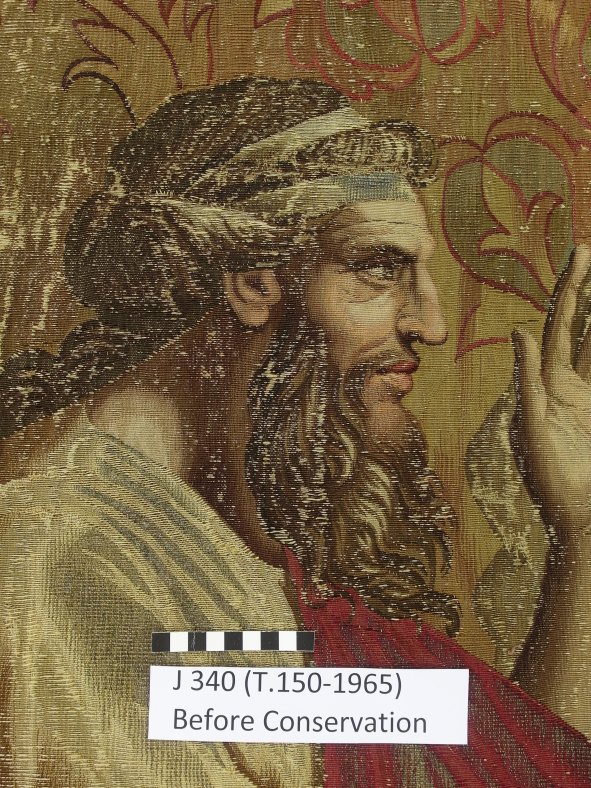 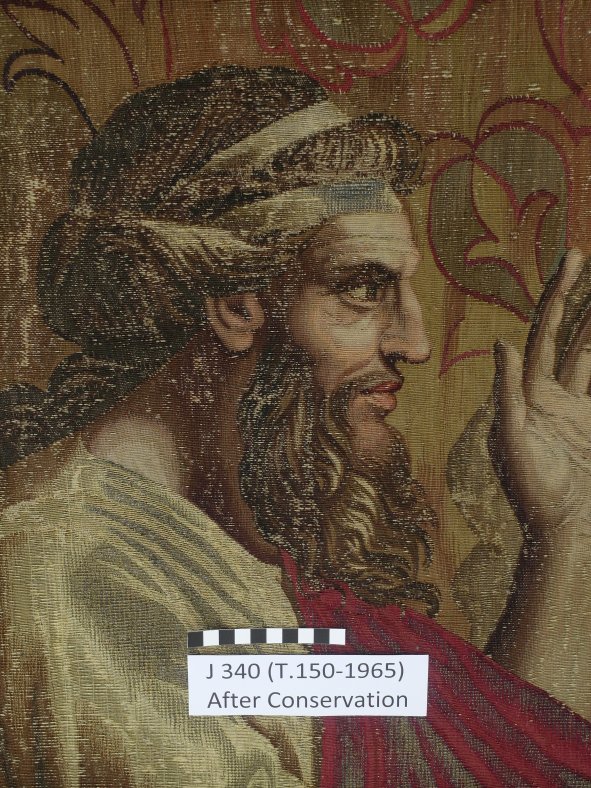 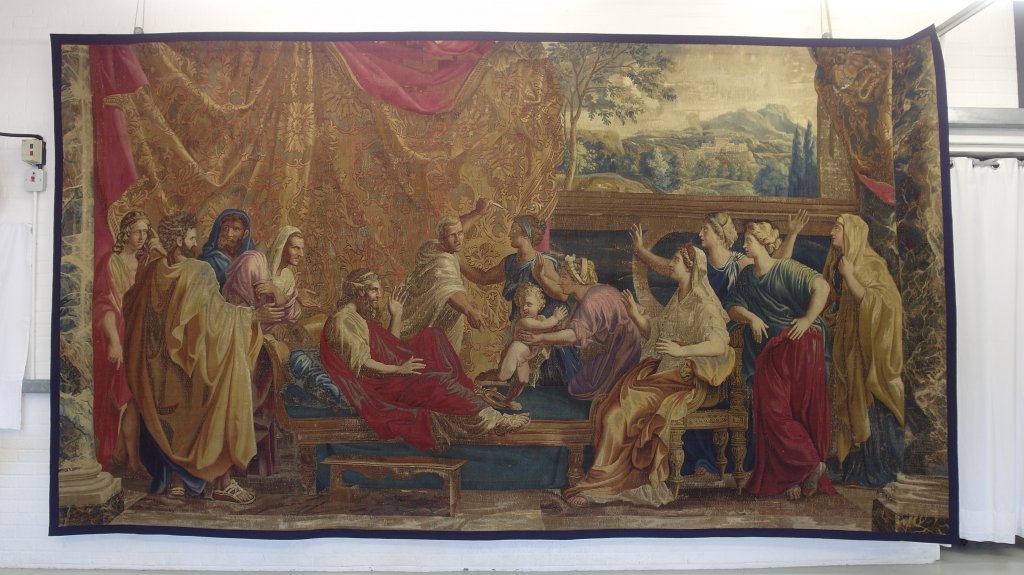