This Altar Frontal set was designed by William Burges, as an integral part of Christ the Consoler church at Skelton-cum-Newby, built between 1871-1877 and now cared for by the Churches Conservation Trust.

The church is a monument of mourning commissioned by Lady Mary Vyner of Newby Hall who lost her son, Frederick, when he was one of a group of young men kidnapped for ransom in Greece, but killed after all.  The ransom money which had been raised was used to build this church in their memory.  It is said that Lady Mary Vyner worked on the embroidery herself.

The set, comprising a Super-Frontal over an Altar Frontal and a Clergy Desk Fall, is designed to be seen with the surrounding altar, chancel and whole church, and forms an integral part of it.  The hangings are of deep red silk velvet with a strong design carried out in gold thread embroidery with gemstones and pearls.  The birds in the design represent the Ravens of the Vyner family crest.

The velvet was surface cleaned, and the damaged corners were supported. The goldthread embroidery was swabbed clean, and loose threads were secured by fine stitching.

On the Super Frontal the areas of the birds, where the loss of sequins had exposed a bright yellow underlayer were covered with a fine gauze, dyed to mask the bright colour.  So many pearls were missing that the impact of the design was partly lost, and replacement beads were found to fill in the missing gaps.

On the Altar Frontal the appliqué fabrics were supported by a combination of adhesive and stitching methods.  The brass filigree discs and gemstone mounts were cleaned and the removal of tarnishing improved the appearance considerably.

The environmental conditions in the church have been improved and the Churches Conservation Trust welcomes visitors to this special church near Ripon in North Yorkshire. 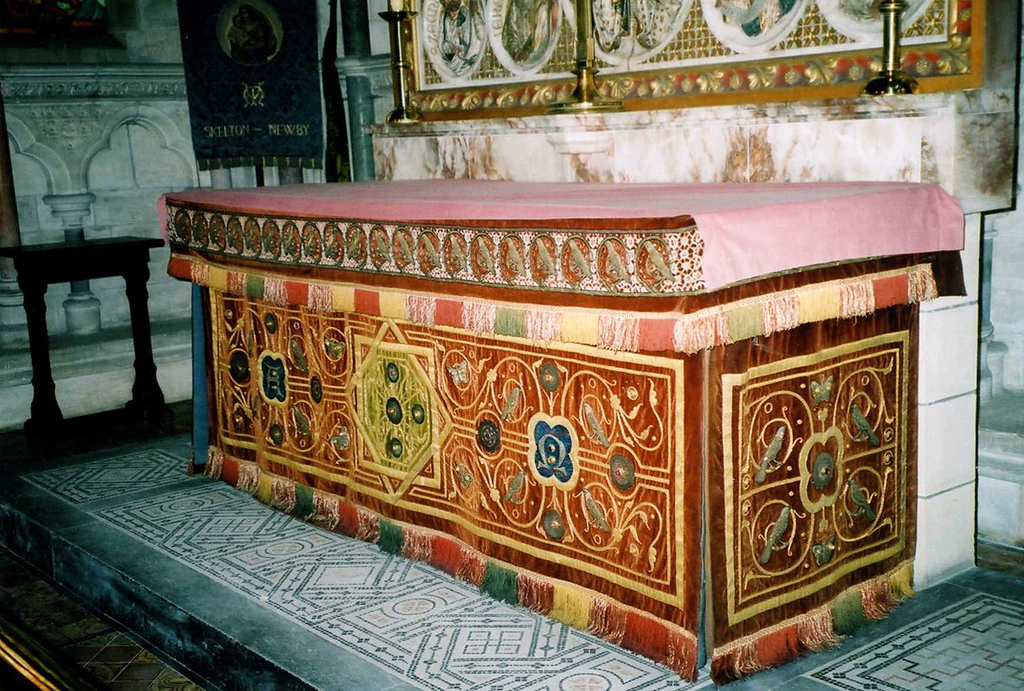 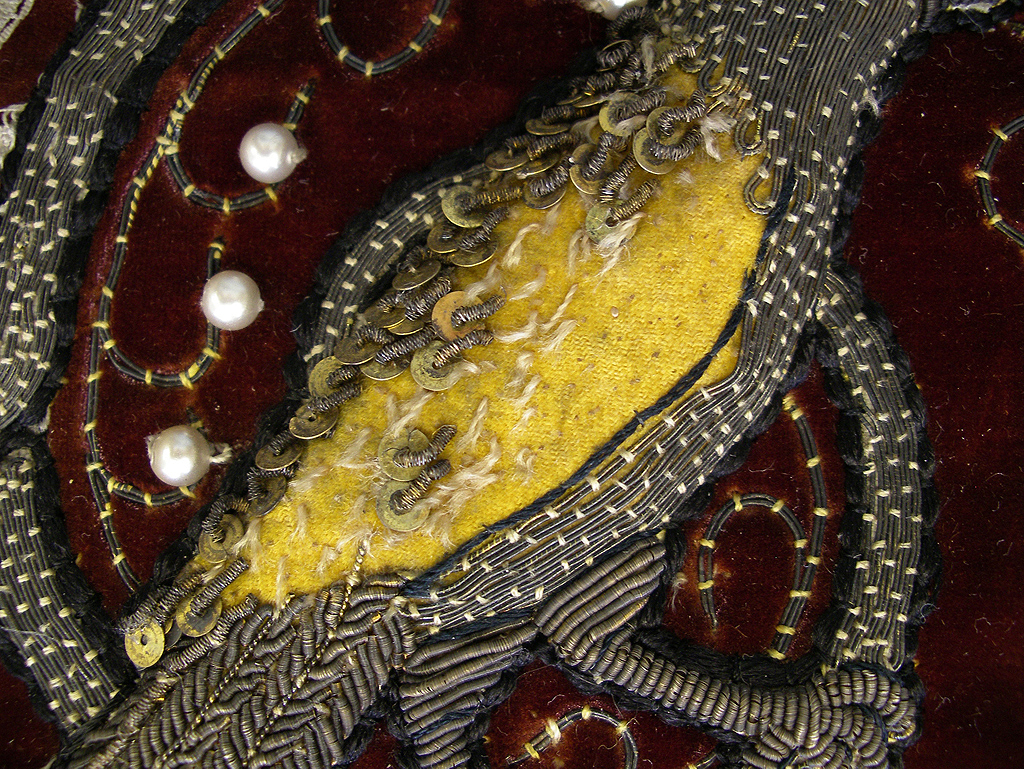 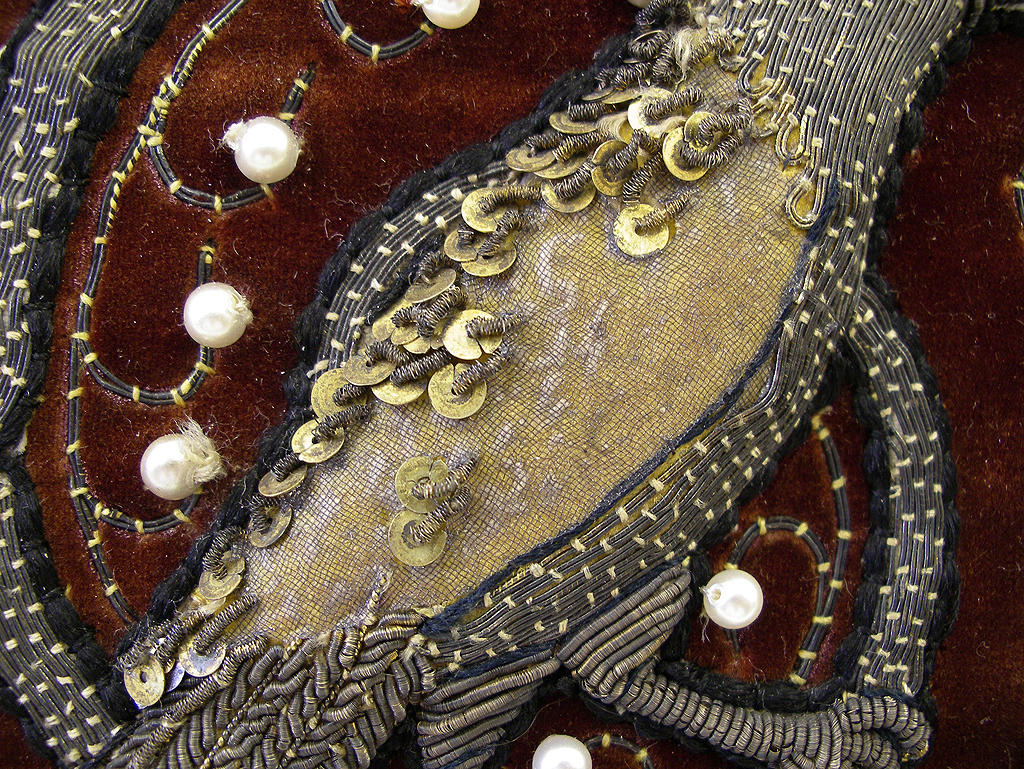 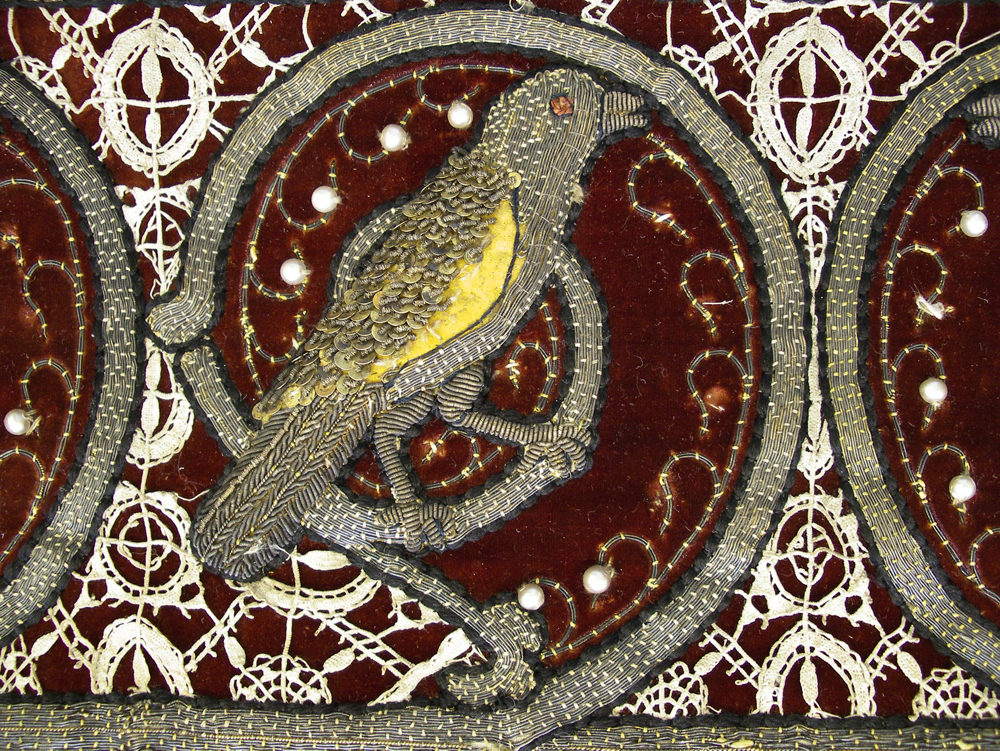 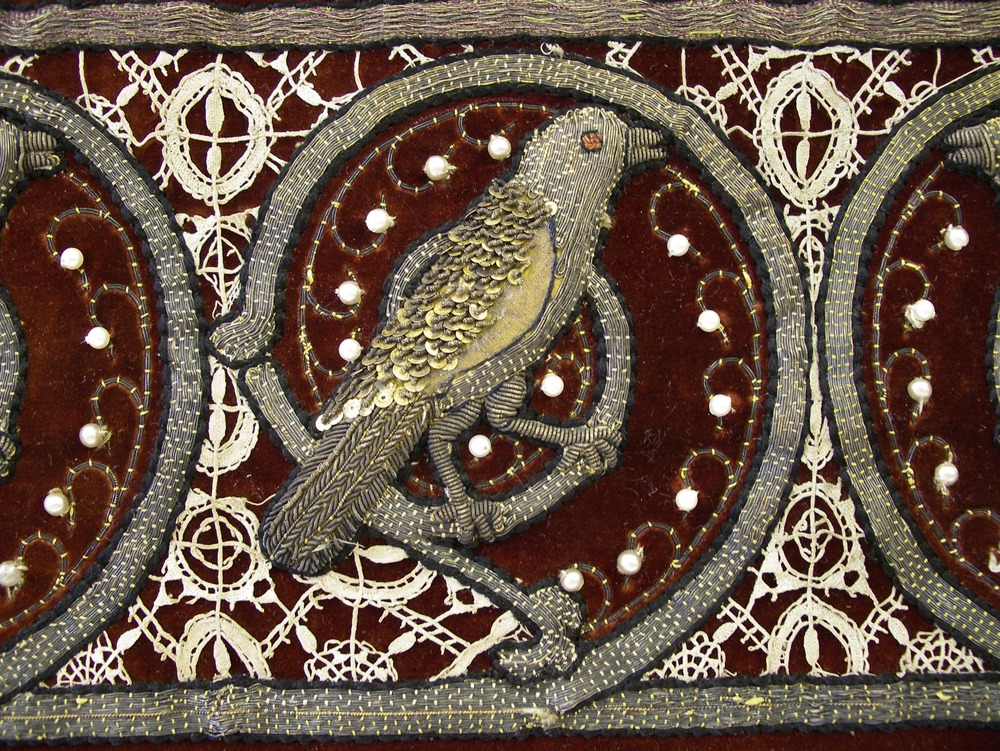 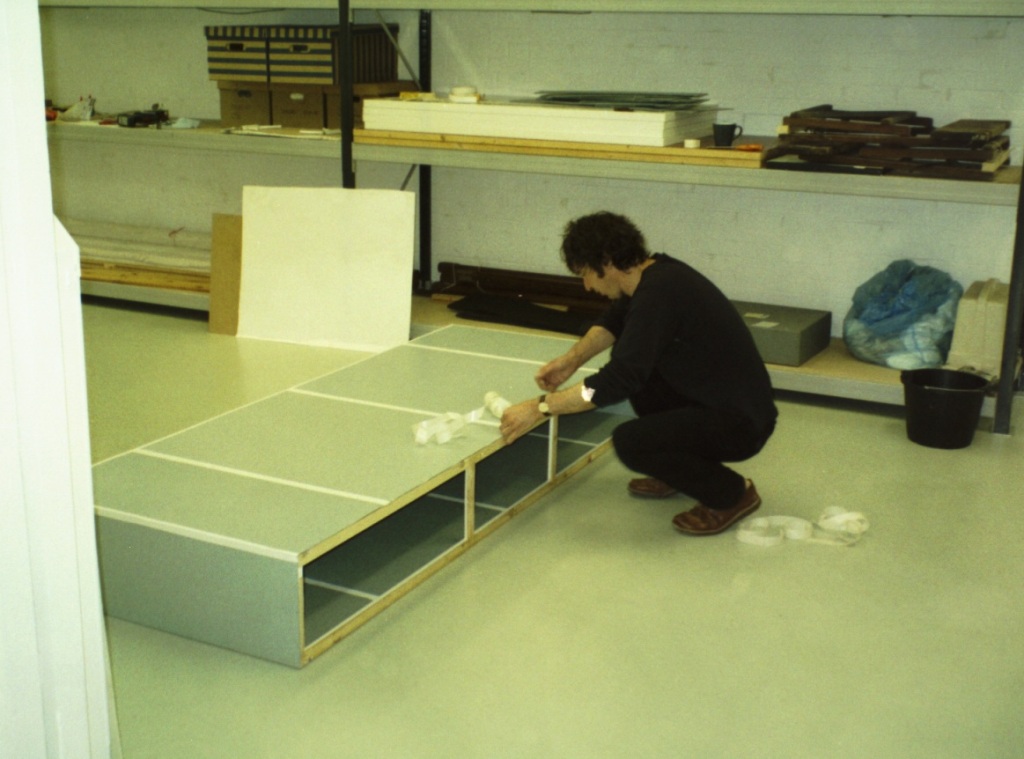 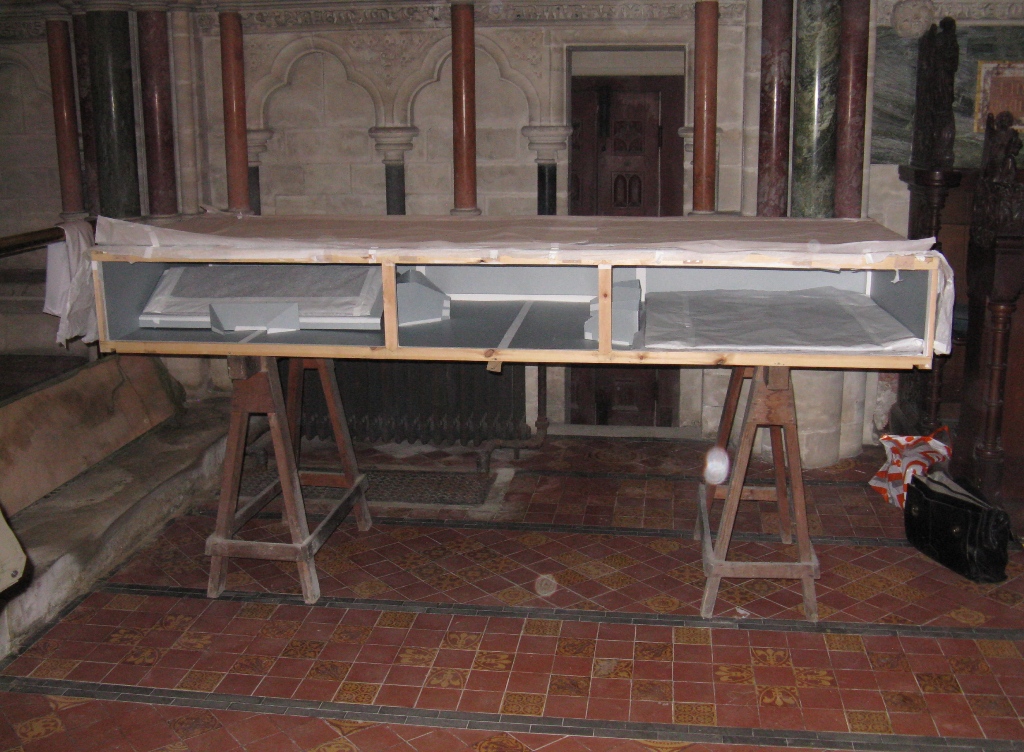 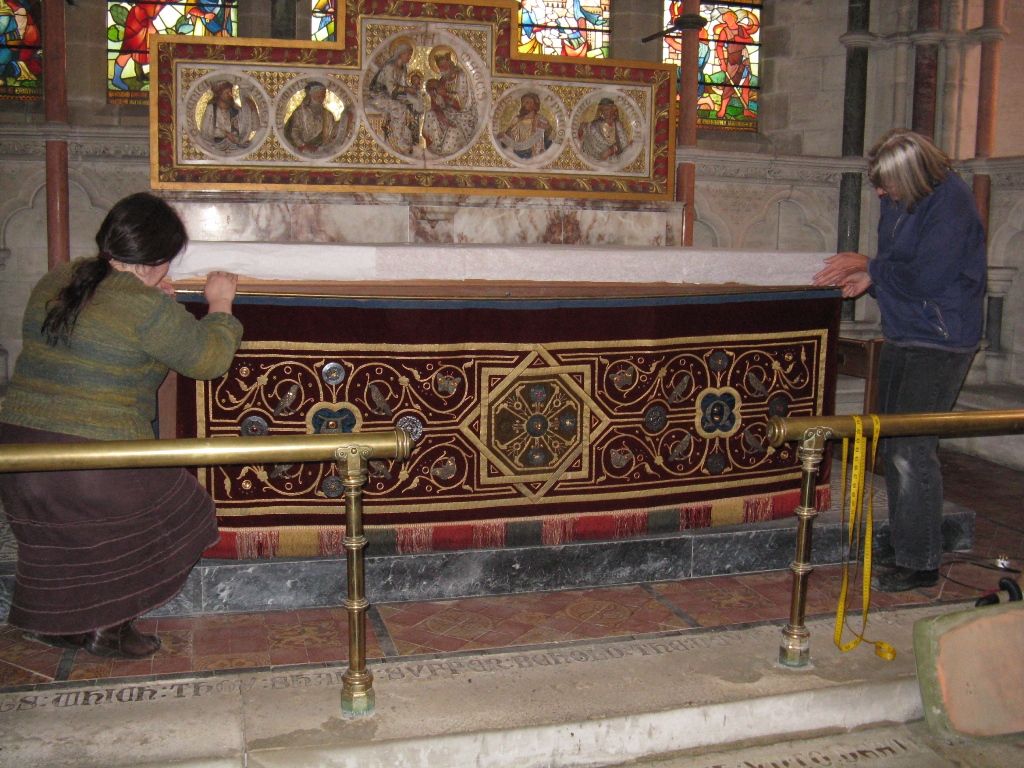 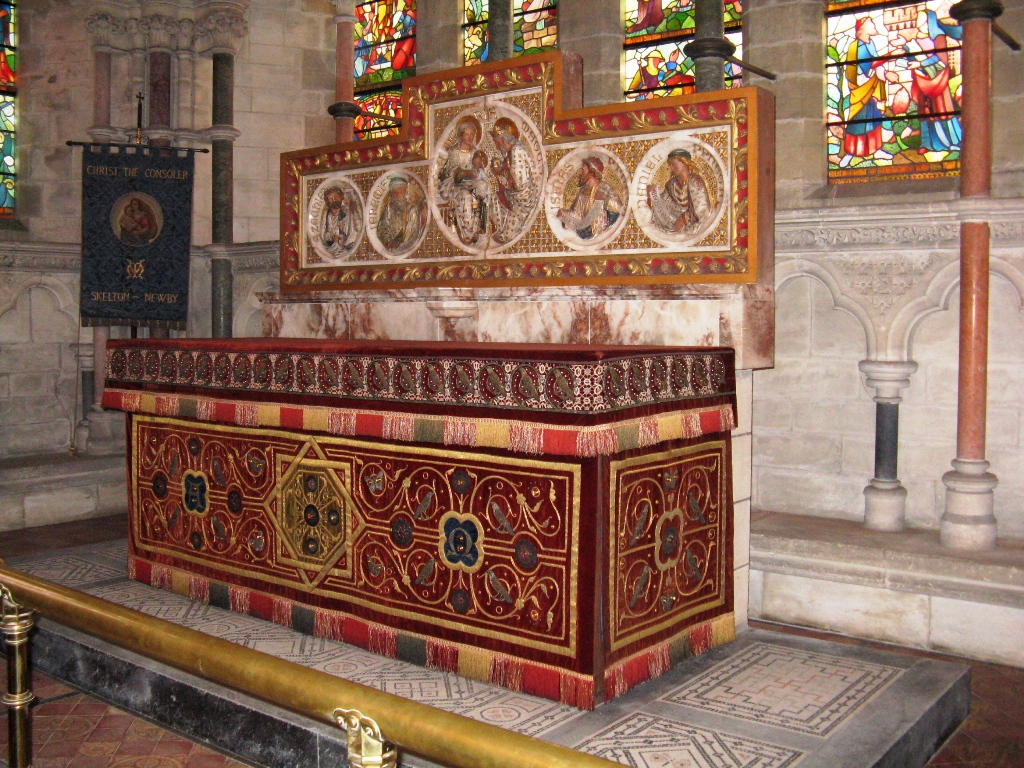