In 2018 it was 180 years since the birth of William Henry Perkin.  To celebrate this the Science Museum’s then Curator of Chemistry, Dr Sophie Waring, explored the objects in their collections linked to his most famous invention: the first synthetic dye, Mauveine.

Early 2019, after this commemoration, we were asked by the Science Museum (London) to conserve and mount a silk skirt and blouse dyed with Sir William Henry Perkin’s Mauve Aniline Dye.  This outfit is estimated to have been produced in England between 1862‑1863.  The silk was worn and splitting in many places, with fibres fraying.  The silk had also suffered fading due to exposure to light, but the original bright mauve colours can still be found underneath the black ribbon trim on the blouse, as shown below. 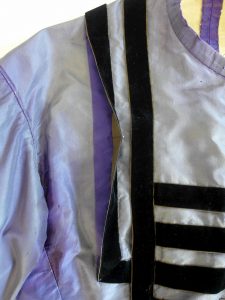 The costume was mounted on a mannequin, which we padded and underpinned to correctly support the shape of the garments. Handling of the silk was kept to the utmost minimum as even after conservation it was extremely fragile.  The mounted costume, as shown below, went on display at the Science Museum during September 2019. 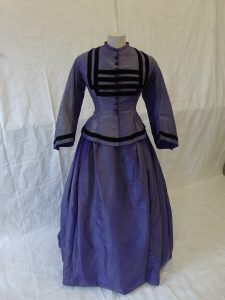 Two insightful articles detailing William Perkin’s mauve dye and the costume itself, can be found by clicking the links below:

The Colourful Chemistry of Artificial Dyes

Up and Coming News – Sudbury’s Second Festival of Silk !